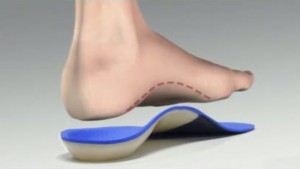 Orthotics are shoe inserts that are used to correct an irregular walking pattern.  They perform functions that make standing, walking, and running more comfortable and efficient, by altering slightly the angles at which the foot strikes a walking or running surface.

Orthotics differ from commercially made devices, such as cushioned heel cups or insoles for shoes.  These are sold over-the-counter in drug stores.  The custom made orthotics, however, are devices made specifically to meet individual needs.  Doctors of podiatric medicine and orthopedic surgeons often prescribe orthotics as a conservative treatment for many foot problems or as a method of control after certain types of foot surgery and their use is a highly successful, practical approach to treatment.

Orthotics come in various forms and are constructed of various materials.  All are used for improving foot function and minimizing stress forces that could ultimately cause foot pain or deformity.  Orthotics are made by taking an impression of the foot called a cast.  The impressions in the cast duplicate any misalignments in the foot.  Then the orthotic laboratory corrects the misalignments with compensation and stabilization techniques.  The finished orthotic is then put into the patient’s shoe and assists in keeping the foot properly aligned.  In some cases, the orthotic may have padding to cushion the foot against the weight of the body.

Foot orthotics fall into three broad categories: those that primarily attempt to change foot function, those that are primarily protective in nature, and those that combine functional control and protection.

The rigid orthotic device, designed to control function, may be made of a firm material such as plastic or carbon fiber, and is used primarily for walking or dress shoes.  It is generally fabricated from a Plaster of Paris mold of the individual foot.  The finished product extends along the sole of the heel to the ball or toes of the foot.  It is mostly worn in closed shoes with a heel height of less than two inches. Because of the materials involved, very little alteration in shoe size is required.
Rigid orthotics are designed to control motion in two major foot joints, which are directly below the ankle joint.  These devices last a long time, do not change shape, and are hard to break.  Aches, and pains in the legs, lower back and thighs may be due to abnormal function of the foot, or a slight difference in the legs length.  In these cases, orthotics may improve or eliminate these symptoms.

Soft Orthotics help to absorb shock, increase balance, and take pressure off uncomfortable or sore spots.  They are usually made of soft, compressible materials, and may be molded by the action of the foot in walking, or fashioned over a plaster impression of the foot.  Also worn against the sole of the foot, it usually extends from the heel past the ball of the foot to include the toes.

The advantage of any soft orthotic device is that it is easily adjusted to changing weight-bearing forces.  The disadvantage is that it must be periodically replaced.  It works particularly well for arthritic and grossly deformed feet where there is a loss of protective fatty tissue on the side of the foot.  It is also widely used in the care of the diabetic foot.  Because it is compressible, the soft orthotic is usually bulkier and may require more room in shoes, or even prescription footwear.

The semirigid orthotic allows for dynamic balance of the foot while walking or participating in sports.  This orthotic is an aid to the athlete.  Each sport has its own demand and each sport orthotic needs to be made correctly with the sport and the athlete in mind.  This dynamic orthotic helps guide the foot through proper functions, allowing the muscles and tendons to perform more efficiently.  The classic, semi rigid orthotic is constructed of layers of soft material, reinforced with rigid materials.

Orthotic devices are often used in the treatment of children with foot deformities, and are very effective.  Most podiatric physicians recommend that children with these deformities be placed in orthotics not long after they begin to walk in order to stabilize the foot.  The devices can be put directly into a standard shoe, or an athletic shoe.

The length of time a child needs orthotics varies a lot, depending on how serious the deformity is and how soon the corrective process begins.  Who wears Orthotics? Perfect feet are very rare, and therefore just about anyone can benefit from orthotics.  Orthotics are especially helpful in treating over pronation, or flat feet.  They can also prevent and help improve many of the foot problems that cause discomfort in otherwise healthy people.  Think of it in terms of wearing eyeglasses.  Both eyeglasses and orthotics adjust bodily imperfections that prevent people from functioning at their full physical potential.  In both cases, a physician will do a complete examination and prescribe the proper amount of correction.

Most people can achieve some benefit from an orthotic.  There are several symptoms that may indicate misalignment of the feet.

You may be a candidate for orthotics if:

One side of the sole of your shoe wears out faster than the other;

You sprain your ankle often;
You have chronic knee, heel or lower back pain;
Your shins hurt;
Your toes are not straight;
Your feet point inward or outward when you walk; or
Your heels hurt when you first get up in the morning

Your feet should not hurt. Pain is the body’s way of warning you that something is not right.  If you ignore pain, whatever is causing it could get worse.